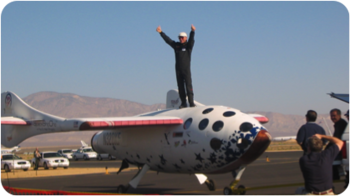 This project will develop a competition with an associated large prize purse that will support and accelerate the market transformation towards a sustainable air transport system by targeting and breaking down stubborn technology and finance barriers that are unable to be solved using traditional means.

Sustainable Sky will work with the X-Prize Foundation to launch a grand prize competition aiming to accelerate market transformation of the airline industry towards a sustainable future. This competition will be targeted at breaking down the stubborn technology and finance barriers that are unable to be solved using traditional means.

Prize competitions have a long and successful history in the aviation industry. The original modern aviation prize was the Orteig Prize, which offered $25,000 in 1919 for the first non-stop flight between New York and Paris. At the time such a feat was deemed crazy and impossible. However, human and financial capital flocked in effort to claim the prize. As a result, only a few years later in 1927 it was won by Charles Lindbergh who in doing so inspired millions and laid the seeds for a global long-distance air transport industry. More recently the Ansari X Prize, from the X Prize Foundation, was created which led to “the first non-government organisation to launch a manned reusable spacecraft into space twice within two weeks”. It was won in 2004 by Burt Rutan’s SpaceShipOne. The small US$10 million cash prize attracted over $100 million into new technologies in pursuit of the prize and single handily has laid the foundation for a civilian commercial space industry .

“Prizes work – almost by definition, since they pay only for desired results not noble failures. The power of prizes to stimulate innovation comes from their ability to mobilise resources, intellectual as well as financial, and to draw attention, which can influence the perceptions and actions of potential solvers or society at large.” - Jonathan Bays, ‘Prizes: a winning strategy for innovation’, McKinsey & Company report

“A properly structured prize literally creates the opportunity for almost, what I call, off-balance-sheet risk taking; where a company or government

agency or individual can put up an audacious goal and, if it’s won, amazing. They’re a hero. And if it’s not won, it’s no skin off their nose, so to speak” - Peter Diamandis, Chairman and CEO of the X Prize Foundation.

In addition to the main prize, this project will also setup and run smaller iterative crowdfunded prizes via heroX.com

An example of a sustainable aviation mega-prize concept is the Oneworld Oneprize written several years ago by the founder of the Sustainable Sky Institute.

Welcome to the Sustainable Sky Institute